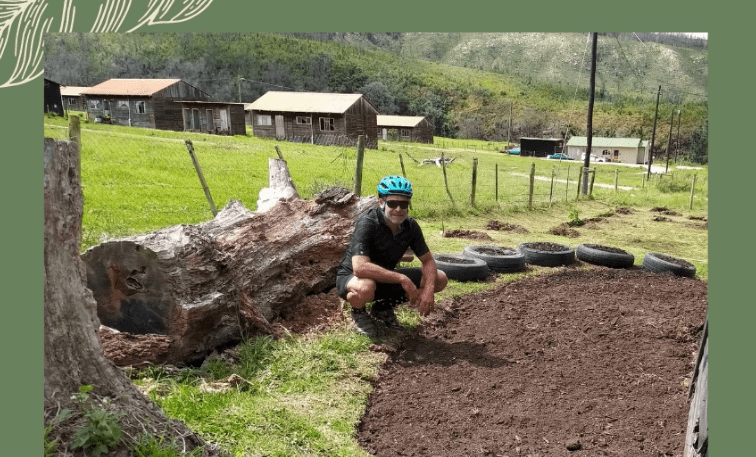 “Before the emergence of this pandemic, I started plans to raise awareness of our natural biome, by using my passion for cycling to raise money for an amazing local Non-Profit-Organisation in Wilderness whose intention is to assist the natural restoration of indigenous forests in the Garden Route, Precious Tree Project.

Since the current pandemic, we have seen how communities less fortunate than us, are being starved of essentials: basic food and health supplies.  This highlights the importance of becoming sustainable: by growing our own foods, planting trees that clean the air and recycle water around us. Nature heals and gives us medicines through its offerings of medicinal herbs, plants and trees.

My mission, together with Precious Tree Project, is extended to not only plant indigenous forest trees, but to share, teach, develop and actively regrow what we have unconsciously pushed back for so many years and create sustainable livelihoods.

I commit to making my passion for cycling, a (sustainable) vehicle to maintain ongoing awareness.

What we do matters. I invite you to join me.

A big thanks to each and every volunteer for your support on the day and making this possible! A special thanks to Coyne Healthcare who have fully supported Doctor Jon’s tree-cycling fundraising efforts for us over the past year, which has afforded us the opportunity to improve the daily school – going lives of the young children at Bergplaas Community Creche in a number of ways! 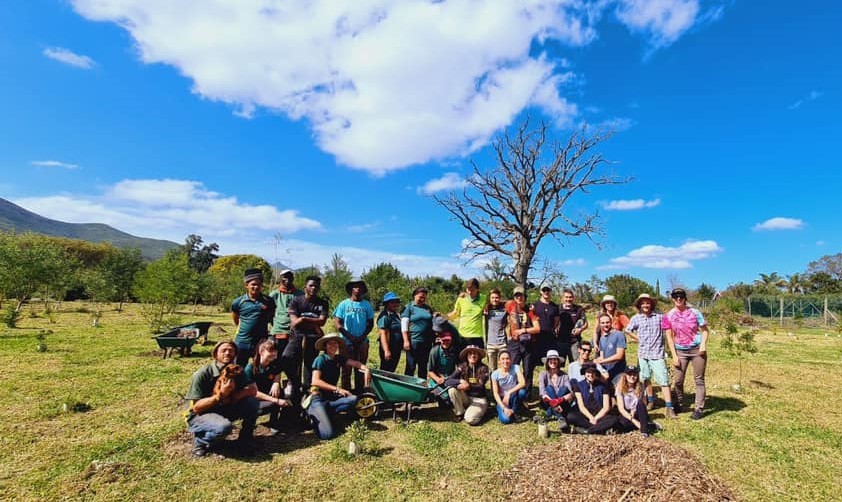 On the 18th of September, the team at the Garden Route Botanical Gardens in George hosted a day of tree planting – honouring the gift that mother nature extends to us in the form of trees by planting trees.

Precious Tree Project, in collaboration with Jon Morley’s Tour de Burn project, donated a range of indigenous forest trees and Keurboom seeds on the day to assist them with their passionate restoration and reforestation efforts. Our enthusiastic team of volunteers joined in with those of the Botanical Gardens to plant out 143 precious trees on the day. Thank you!

If you would like to sponsor an indigenous forest tree, click here to visit our online tree shop.

One of the incredible benefits of planting out bio-mimicked forest patches and assisting the reforestation process of the indigenous forests in the Garden Route region is the value this brings to our wildlife, particularly i.t.o assisting their survival rates.  As one of the few natural forest biomes in South Africa, our Garden Route forests are home to many species of our four-legged wildlife:  the region is a well-known haven to the Knysna elephant, rooikat, leopard, bushbuck, vervet monkeys, porcupines, baboons, etc. Not to mention the bird, reptile and insect populations that thrive when the forests are healthy. A haven is more than a safe space for our circulating wildlife, it is also a fundamental ongoing source of food for them, from the forest trees themselves and from the forest floors.

Factors including the rapid increase of human activity and development in the area, climate change, the uncontrolled spread of highly invasive non-indigenous trees (which themselves compete for water amongst themselves) all have had a negative impact on our local forests – and therefore on the territory in which our wildlife naturally roam, breed and feed.

Re-establishing and protecting wildlife corridors is a key component of our reforestation efforts and between April and August this year, in slow, regulated lockdown-motion, we got stuck in with small groups of volunteers at a time and took on the task of rehabilitating a site that is regularly traversed by troops of baboons, vervet monkeys, by bushbuck, porcupines and a rooikat. The task is one of both clearing the invasive wattle and blackwood trees that have infiltrated the site from the neighbouring state owned property and then planting out a range of endemic tree species in the spaces that were cleared. And so the assisted reforestation and natural regeneration of the forest floors begin …

Thank you to all donors for their contributions that make projects like this possible  – we planted out over 100 precious trees to grow the wildlife corridor, which included outeniqua yellowwood, boekenhout, forest elder, cape chestnut, cape beech and keurbooms.

And thank you to all our enthusiastic VIP’s who pitched in (as and when regulations allowed) and got their hands dirty!  A much needed grounding reconnection to mother earth in a year when being outdoors and in nature has been sorely needed!

If you would like to support our ongoing efforts of assisted regeneration of our forest biome, click here to sponsor trees! With lockdown restrictions for most of the year, Dr Jon Morley – our passionate “cycling for trees” partner – has yet to clock more miles on his bicycle in a “staged cycling event” across the Western Cape in order to raise awareness around the significant impact that forests and trees have on our own personal health and well-being. Continuous training on his cycle through the mountains, luckily has been permissible, and is keeping him in shape while allowing him to still get exposure to the public however small and continue to raise local awareness.

He also managed to get his hands dirty with that “good stuff” called soil and plant out a batch of the trees that were donated to his tree-cycling project.

These precious trees were donated by Dr Peter Hodson, and between the Vitali team and our VIP’s (very important planters), we spent a morning planting out a small bio-mimicked forest patch of indigenous trees at Vitali Health Centre in Hoekwil.

Tree species included Outeniqua Yellowwood, Boekenhout, Wild Olive and Camphor Bush, which themselves come with their own recorded medicinal values.

The presence of a growing and maturing mini indigenous forest – on a site where holistic health and well being are of considerable interest to the Doctors, Health Consultants and staff at the Centre  – will increase the healing energy of the site tenfold over the years to come. Cycling through heaven …
To get to hell …
To come back again …
To plant out more precious trees!

If you would like to support this project and grow and plant trees in the Garden Route, click here! 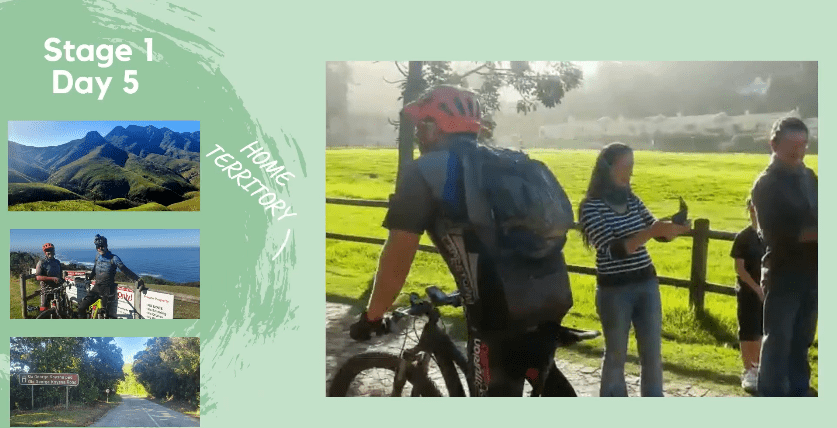 And a big thank you to the doctor’s wife, Ez Morley, for everything, including all the great photos that contributed to these posts.

Watch this space for Stage 2 of Tour de Burn – a tree cycling project!

Click here to support Jon’s 12 month drive to raise funds to plant out 5000 indigenous forest trees in the Garden Route! 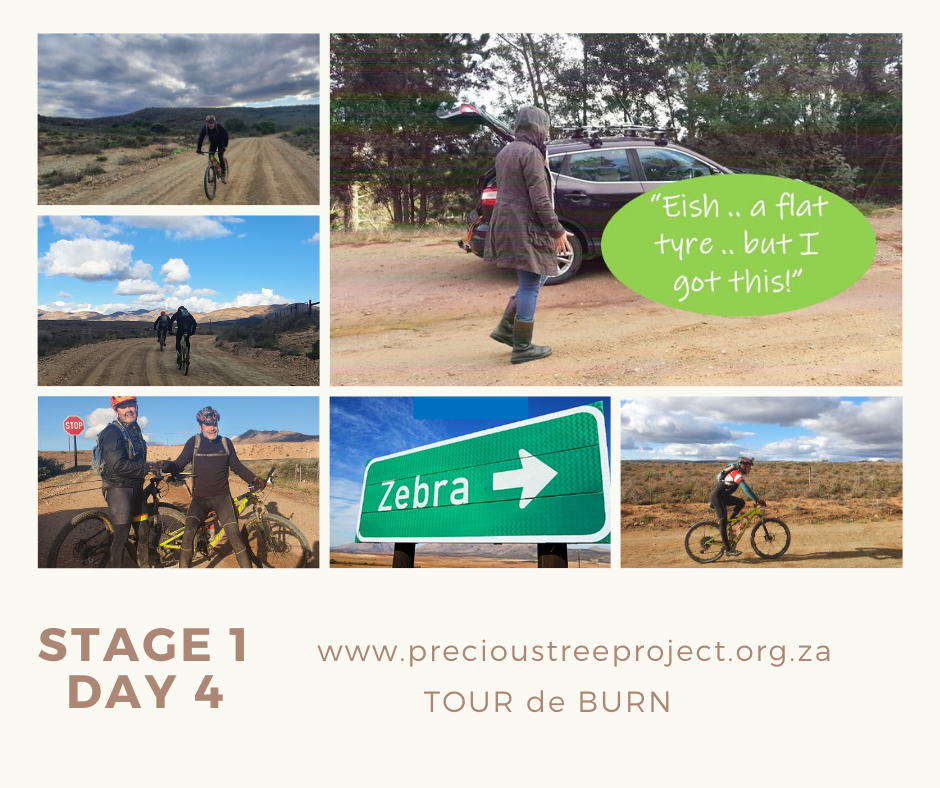 Our tree-cyclists were up and off relatively early on day 4, the day that the good doctor’s wife had to handle the fluffing responsibilities for the team on her own. It was also the day that the support vehicle had a flat tyre… and when you are deep in Karoo Territory, where big muscle assistance is no-where in sight & cellphone reception is between zero and nothing, it’s a task you get to perform on your own!

Well done to Mrs Morley for keeping it all together and holding fort, and well done to the guys for clocking up another hundred kilometer notch on their Tour de Burn belts!

Full on appreciation of the panoramic views that the Karoo offers, whether you are a tree-cyclist on a bicycle or a fluffer in a support vehicle.

The pleasure of being able to observe two dedicated, super-fit men cycling 100kms through the magnificence of the Karoo was not lost on us.

Big riding and easy-on-the-eye driving. Great route to go … either way you tackle it.
Click here to support Jon and his campaign!

Cycling into “Big Aloe” Territory between Uniondale and de Rust, the tree-cyclists clocking up 100 kilometres in high daytime temperatures, typical of the Karoo conditions where beauty thrives all around. 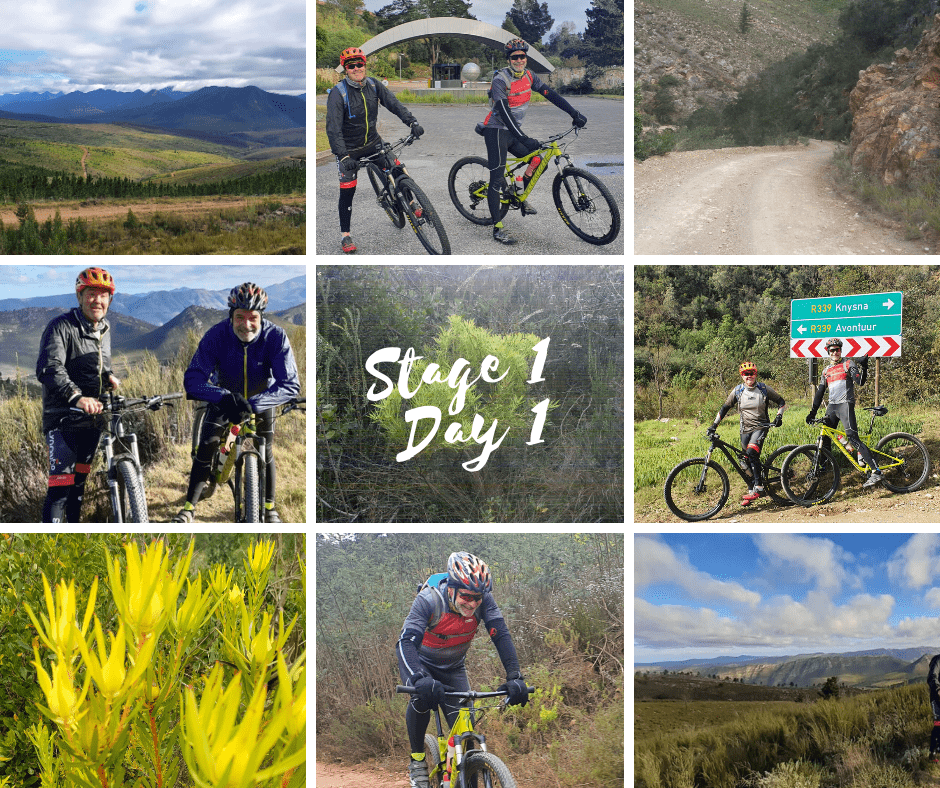 The guys started the cycle on day 1 at the entrance to Simola in Knysna with the most difficult climb of the stage. As the support team, Ez and I, waved them off with backpacks loaded with water, energy bars/drinks/snacks and gave them some space to tackle the Prince Alfred Mountain pass ahead of us. The Prince Alfred mountain pass is a glorious drive and we navigated our way up the mountain slowly (no more than 10 kms per hour) in order to take in and take shots of the breathtaking beauty of the area.

Half way up the mountain pass we thought to notch it up a bit and reduce the distance between us and the boys until we had them in our line of sight. It took way longer to catch up with them than we anticipated that at one point going up the pass, we thought we had missed them somewhere on the road. But of course, we hadn’t!

Lesson to remember for the following 4 days: do not underestimate the power and speed of these two (and we certainly didn’t do that again).

To Be Confirmed. Keep an eye on our Facebook page for live updates! 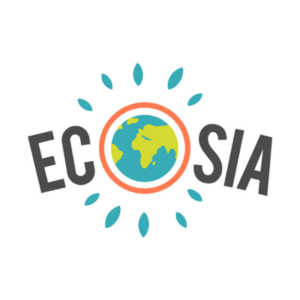 TREE MEDICINES OF THE GARDEN ROUTE: No. 13 – White StinkwoodScientific Name: Celtis africanaFamily: CannabaceaeCommon names: white stinkwood; witstinkhout (Afr.); umVumvu (Xhosa); uSinga lwesalukazi (Zulu); Modutu (Sotho & Tswane); Mpopano (Venda)Celtis africana is common and widespread across South Africa and well recognised for the beautiful umbrella effect of its branches as it grows and matures. This is a deciduous tree and occurs in a wide range of habitats - growing in dense forest, on rocky outcrops, in bushveld, in open grassland, on mountain slopes, on coastal dunes, along river banks and in kloofs. Its scientific name “ Celtis” is derived from the ancient Greek name for those plants regarded as the lotus of the ancients).Separate male and female flowers are produced on the same tree and the flowers are usually pollinated by bees. This species is not related to the True Stinkwood (Ocotea bullata) nor do they look similar but this genus (Celtis Africana) is commonly known as white stinkwood because of the pale, bordering on white colour of the wood and the odour emitted when the wood is freshly cut.#treemedicine #gardenroutetreemedicines #treeplanting #reforestation #thrivewilderness#ndigenoustrees #endemictrees #naturalhealth #vitalihealthcentre #coynehealthcareNotes:a. Bear in mind when harvesting any indigenous tree to do so sustainably. Different trees and different parts of a tree have their own harvesting methods and periods throughout the year. The South African National Biodiversity Institute has informative harvesting tips on their website (SANBI link below)b. As with any medication, when using plants for their medicinal values it is recommended that you seek professional guidance from a natural health practitioner and undertake appropriate research before use.If you would like to sponsor an indigenous forest tree, click on the following link: precioustreeproject.org.za/shop/gift-a-tree/For additional information on germination, propagation, ecology, maintenance, etc of indigenous SA trees, go to: www.pza.sanbi.org. ... See MoreSee Less